I decided to start this post the evening after we’d just had our cocktail hour/reception tasting at Jay Astafa’s vegan restaurant in Long Island. My fiance Josh and I went there with our moms, who were supposed to give us honest feedback from a non-vegan guest’s perspective.

Although I never considered myself to eat particularly healthy, I certainly would not eat any of this food on a daily basis, which consisted mostly of fried foods, heavy pastas, and entrees drenched in sauce and cheese. However, I did hope my guests would be excited to try vegan versions of their favorite comfort foods.

We walked in and were seated in the back near the bathroom and another entrance to the kitchen. The floors must have just been washed because the smell of cleaner was so pungent that it clogged my sinuses. When I got home, my hair smelled so much like the cleaner it was nauseating and I had to take a shower. I also had to wash my clothes, which had soaked up the smell. It was also freezing in the restaurant and we kept our coats on for most of our time there. Aside from those inconveniences, the space itself was pleasant, with white tablecloths and a pleasant, neutral color scheme. There were also half wilted flowers at some tables in tiny glass jars.

We chose items from a menu that Jay had emailed to me, hoping to find potential winners for the actual wedding. Jay was going to prepare our selections for the tasting, which cost $300 (which would be applied toward catering if we chose to move forward with them).

Fried mac n cheese – Everyone liked it. Josh’s mom especially. I thought it tasted off. The breading reminded me of fried chicken (and was equally as greasy) and the mac n cheese was odd. Maybe it was just too fattening to feel good about.

Blini with creme fraiche and seaweed caviar – Jay said he wasn’t able to make this for the tasting.

Tofu crab cake – Everyone liked this (including me!) No one could put their finger on what exactly we were eating – we weren’t fooled into believing it was actual crab, but it had a great herb flavor and texture.

Spanakopita – This tasted just like the real thing – I’m not sure if the filling was a tofu or cashew based ricotta but I don’t think anyone would tell this apart from actual ricotta cheese. However, it was very greasy and flaky and we didn’t think it would be good for a cocktail hour.

Buttermilk fried cauliflower with cheddar waffle and maple bourbon syrup – The cauliflower had the same “fried chicken” breading, but overall it was fun to eat and tasted good. Everyone liked it. Josh’s mom couldn’t even tell it was cauliflower.

Buffalo cauliflower with micro celery and blu cheese dip – This was SO spicy, no one liked it. Josh ended up eating everyone’s portion because he’s a champ.

BBQ jackfruit tacos – This was a clear winner in everyone’s book except mine. The jackfruit tasted like BEEF and I was very put off, but both of our moms were obsessing over it. We ended up putting it on the cocktail hour menu twice.

Mini burgers & fries – Jay let us know that these mini burgers (already tiny) would be even smaller for the actual cocktail hour. They were layered with a tiny slice of cheese, tomato, and pickle, the seitan burger was a pinkish color, and we all found that a little weird. It was odd to eat since it was stacked so high and we had to smush it down. It tasted good though but Josh was the only one who really liked it. We didn’t get any fries.

Tomato tartare cones – We were only served the tomato portion in spoons. It felt odd not being able to try the entire appetizer. It tasted OK. I was expecting it to mimic tuna more but I could definitely tell it was tomato.

Vegetables pigs in a blanket – Jay said he wasn’t able to make this for the tasting.

Grilled peaches + arugula + cashew burata – Jay wasn’t able to make this for the tasting, but he made a kale ceaser (which no one liked) and tomato and cashew caprese – which my mom and Josh’s mom liked but Josh and I didn’t.

Seitan piccatta – I usually order this whenever we go to a fancy vegan restaurant so this was a familiar dish for me. This one had way too much lemon, and Josh’s mom made a sour face when she tried it. It’s too much of an acquired taste to serve to all of our guests, but this wasn’t even a dish we picked for the tasting anyway.

Seitan parmesan – I didn’t like this right off the bat because it was drenched in sauce and cheese. The seitan was tougher in this dish too. Josh liked it and I think everyone else did, but the sauce and cheese sort of overflavored it (much like the “fried chicken” breading in those apps). However, it didn’t seem memorable for anyone.

Eggplant parmesan – We got this dish last and by then we were probably too full to care about it, but it tasted so much like the seitan parmesan that it just didn’t wow us.

Seitan marsala with wild mushrooms – We all liked this dish and this was the clear winner for a seitan pick. The seitan in this dish was more tender, and it came with a flavorful non tomato sauce (finally) and large slices of fresh mushrooms.

Eggplant rollatini – Everyone loved this dish except for my mom. The eggplant was battered and fried and wrapped around tofu or cashew ricotta – which was delicious. I was so surprised that Josh liked it as much as he did, considering he always said he wasn’t a fan of ricotta or similar products.

Orrechiete with sausage and broccoli rabe – There was a lot of liquid in this dish, which was odd. The pasta itself was ok but spicy! The sausage was spicy and the fennel was overpowering. The broccoli rabe was bitter, according to my mom. I think Josh liked it but the rest of us didn’t find it appealing.

Lobster mushroom ravioli – Jay said he wasn’t able to make this dish for the tasting.

Russian potatoes with mushrooms – We asked Jay to make this for us (it’s not part of his regular catering menu). Everyone loved it but the potatoes were a little burnt (although Josh’s mom loved them so much she said she didn’t even notice).

Haricot verts – Green beans in Italian restaurants are always delicious with lots of garlic. No disappointment here, but my mom thought it was too simple a dish to pay so much money for.

Ratatouille – My mom liked this, and I think our family would too. It was a mix of mostly zucchini, with some peppers and another vegetable I can’t recall. I am not into these types of vegetable dishes and neither was Josh or his mom.

We were able to go over the menu with Jay afterwards. He wasn’t there while we tasted the food but he brought each dish out himself. Later, as we talked, he asked for our feedback. We were honest about not particularly liking any of the pasta dishes, which he seemed to have taken personally. He kept asking why we didn’t like them, and kept pushing us to pick a pasta dish for the buffet. In Russian culture, pasta is seen as a quick, easy, and cheap dish and not particularly something served at Russian restaurants or functions (the only exception being linguine with clams which I’ve seen quite often). My mother did try to explain that but he kept insisting that we should have a pasta dish. We said we’d think about it. He showed us photos and made other suggestions. One of the things I’d mentioned, which Jay said he’d make note of, was that I wanted our wedding to be eco-friendly. I said that I didn’t want any disposable plastics to be used. For the cauliflower and waffle app, there was a plastic maple syrup holder that was placed on each one. When he showed us photos of it, I asked if it’s reusable and he said no. I was a little surprised that he didn’t remember our previous conversation.

At some point toward the end of our discussion, when we were talking about dessert, he asked me what my theme was. I was sure we spoke about that several times. Each time I spoke with Jay (2 phone conversations and one in person meeting) I felt like a new client. He didn’t seem to remember anything about me. He wasn’t interested in my vision, who Josh and I are as people, what role veganism plays in our lives, and what it meant to us to have a vegan wedding. No matter how many times I spoke about my budget he never seemed to take it into consideration, constantly offering other options that were costlier, especially ones that I’d already turned down before. When I got home after the tasting, I got a text from my wedding planner asking how it went. I had to call her and vent. She was sympathetic and made me feel like I had someone on my team. Then I sat down to write this blog, which I hope I will be able to publish after our wedding is over, and all vendors have been paid. I take solace in knowing that after dealing with a difficult vendor, I can share my experience with others, so that they may feel a little more prepared going into this, as I wish I was.

Ultimately, I decided that it would be unkind to myself to continue working with a caterer who was so difficult to deal with, and I ended up reaching out to Cinnamon Snail to cater our wedding. My wedding planner suggested that even if everything went smoothly on the day of the wedding, I would still spend the next months leading up to it stressed and worrying if everything would actually turn out like I’d asked.

The pros of working with Jay:

The cons of working with Jay:

Working with a catering manager instead of Jay directly may have been a better compromise for both of us as he seemed to be overwhelmed with handling all aspects of the business by himself, however, I also wonder whether his business models or goals are aligned to care about people like us. We felt overlooked because we weren’t the high end clientele Jay seems to want to be associated with, despite being willing to host a $200/pp dinner. I couldn’t possibly recommend him given the experience that I had, although I am sure this will not deter the higher end clientele seeking his services. I truly hope that his business flourishes, his methods change, and he finds the compassion needed to work with couples planning their weddings. Until then, I hope my experience sheds light on working with this particular caterer and on why you should always choose your sanity above everything else! 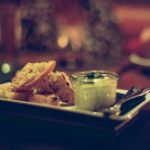